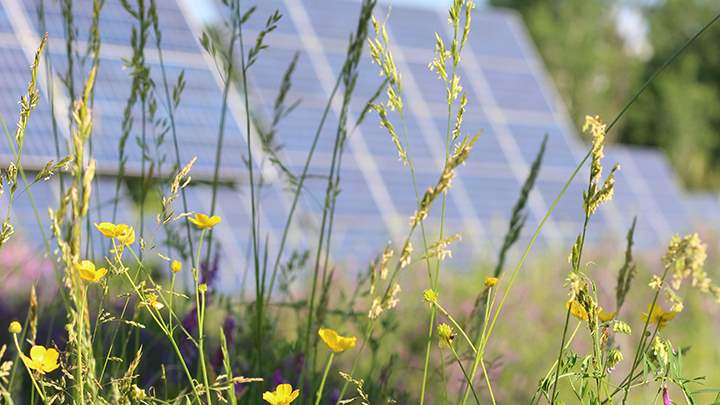 "We want to be part of a conversation about farming and climate change..."

Henry, Esther and Monty Rudge, fourth generation farmers at the 350-acre Ballingham Court on the River Wye south of Hereford. This mixed farm produces fine food such as Hereford beef for Waitrose, apples for Copella juice, lambs for the spring market, organic pears…

The family have invested in greener machinery and continue to introduce measures to reduce their carbon footprint. They point to solar panels and an Anaerobic Digester as key additions – the latter a system that, in short, helps the farm turn methane into energy. Although the farm is still paying back the loan for the 660 PV panels which have stood proudly in one of the pasture fields since 2014, they are proving especially beneficial in the current energy crisis; and the sheep keep the ground tidy around them! And while the Anaerobic Digester proved more challenging to settle in and manage when it arrived in 2016  (“we all have an engineering degree now,” Esther jokes), it’s reaping benefits for the business every day. Add into the mix regenerative agriculture, cattle management to reduce methane while delivering locally sourced beef to the market, a glamping offer, 4 km of huge hedgerows, a kiln-dried firewood business utilising the woodland, and a wildlife corridor so animals can move easily from the Wye to the woodland…. the list goes on.

Why they signed up

To celebrate what we’re seeing here, and to be part of the conversation about farming and climate change. The Rudges want to showcase that the way animals are raised and managed can make a difference to the climate. They also know that while a lot of climate action ideas are focused on doing less harm (and delaying the decline of natural resources) initiatives like regenerative agriculture – practised to enrich the soil on their holding for a long time – will restore and regenerate the landscape, combining food production with environmental stewardship.

“We are nothing special. Lots of farms do what we’re doing, and some do it better,” says Esther. “But I am aware, too, that some farms shy away from
this conversation because there can be a lot of misinformation about farming and the pollution it creates (methane from cows being an example). The mixed farming here sees cattle and sheep grazing on land, manure going back into the fields and keeping soil healthy for the crops that are grown there. All these things work together and are part of the cycle of life on our farm. If you take the animals out of the chain you are stripping organic matter from the land which is crucial for the soil.

What’s more, without cows we wouldn’t have pastureland, and so the grass which is so vital for year-round carbon capture. But that doesn’t mean we ignore the emerging technologies or research around environmental issues. So here, instead of getting rid of cows, we are changing the breed to get more meat per acre, and more meat for the methane they produce.

We hope our farm can share some ideas and showcase what farming can look like in 2030 while still delivering the food communities need.”