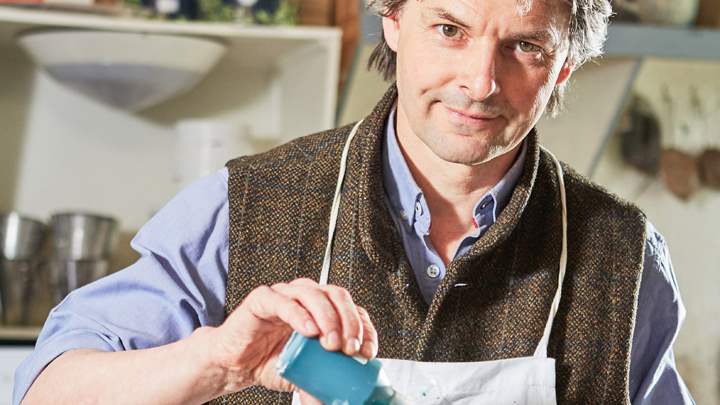 Edward Bulmer Natural Paint, a Herefordshire-based family business headed up by Emma and Edward Bulmer. It has a national reputation for its beautiful natural colours and is now making serious waves with its plant-based sustainable paint ranges and a national campaign called Lifting the Lid.

Edward, an interior designer, had long been interested in how paint was made and quickly recognised the impact of plastics it contained. He went on a quest to find an alternative, finally teaming up with a German-based company called AURO, pioneers in the use of gentle chemistry and plastic-free paints by swapping for a plant-based binder. As plastic hit the headlines, the idea for a UK industry-changing campaign was born.

All paint is made from four ingredients – water, a filler, the colouring pigment, and the crucial binder. Paint is often called ‘eco-friendly’ when it is water based, even though all paint is water based (that’s how it’s made). What is often ignored is the resin binder inside it that contains plastic (polymers derived from petro-chemicals). This can include microplastics (making up some 15 per cent of paints). “It’s estimated that 180,000 tonnes of microplastics from paint end up in our rivers and oceans each year – as they are released in waste, or sanded from walls during the painting process,” explains Emma.

Why they signed up

“We are completely committed to this county and our business is, front and centre, committed to the environment – so we were delighted to join the 30 for 2030 group,” Emma says. “This is a great campaign and an incredibly urgent one. Collective action is powerful. If businesses get together with one voice and show an alternative way of working it could make a huge difference.”

Steps taken and plans ahead

With the company’s range of pioneering, plant-based paint in place, the challenge now is education: hence the campaign Lifting the Lid. They also have plans to build a UK factory to avoid the shipping of the base paint currently made in Germany.

In their own words

“We are a small company with very big ideas about how to make paint differently. We know we face a huge challenge, squaring up against a market dominated by multi-million pound companies with enormously deep marketing pockets who are already calling themselves eco-friendly even if their paint isn’t plastic free,” explains Emma. “We know that it’s only when people understand the difference and start asking about the ingredients before they buy, that they can start buying better.

“That will, in turn, put pressure on other companies to rethink the plastic in their paints. We want to stop greenwashing in this industry, and to share what we’ve discovered with consumers and other paint companies. We want competitors to switch to natural, plastic-free binders, too. We want to make environmentally friendly paint for them. We think the paint industry could lead the charge for the appropriate use of plastic in products. So watch this space…”