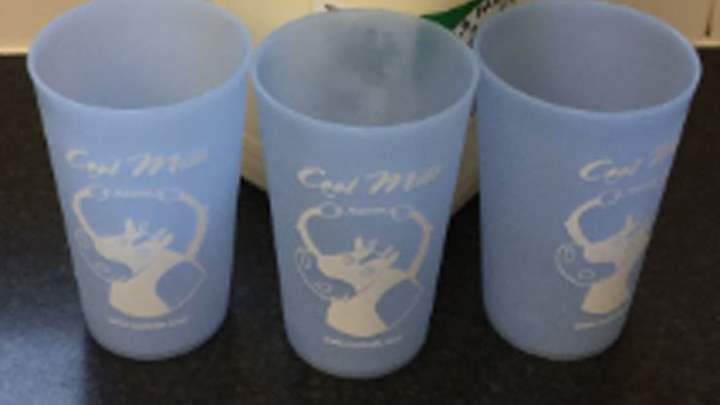 In 2019, 70 children a day had milk via the Cool Milk school ordering system and Bartonsham Dairy in Hereford. Previously, the children drank from 1/3 pint plastic cartons (with plastic straws), which resulted in 70 plastic cartons being thrown away daily or 350 per week. As the school recycling bins were already full, these were sent to landfill.

Following an assembly given by Herefordshire Council waste and recycling services and a visit to Envirosort in Worcester, the school made a pledge to reduce waste. They started with an assembly looking at a whole week’s worth of waste - everyone noticed there were a lot of milk cartons!

They also followed Staunton on Wye Primary's example and started a trial with Year 1 to use Cool Milk's reusable plastic cups and glass bottles instead of disposable cartons. The kitchen staff agreed to wash the new reusable cups in the dishwasher.

The trial was successful and they found that with younger children they needed to drink their milk sitting down outside to avoid spillages in the class. At February half-term the Senior Leadership Team agreed to move to the whole school to reusable cups.

The school is now saving 350 cartons a week which will equate to over 13,000 a year - from just one school. The cleaners have noticed a big reduction in the bags sent to landfill.

The project required the good will of a lot of people. One-use plastic cartons are very convenient and schools will know how long it takes to change from a system which is both convenient and completely embedded, to one which requires extra effort from a number of different people. However they kept reminding ourselves about saving the 13,000 cartons and that it was worth all the effort.

There are now children in all years trained up to collect and deliver cups to the kitchen and the younger children have learnt to drink from open cups, in the main without spillages! There has been the odd milk 'lake' where children have been away or not drinking as much as usual and the office staff have been brilliant in managing the ‘milk levels’.

Orleton would thoroughly recommend other schools ditching one use milk cartons – access to a dishwasher is crucial. Just think how many cartons we could save if every primary school in Herefordshire made this change – David Attenborough would be proud!